What did you do in the 'workshop' today

Number of Hives
Too many - but not nearly enough

JamezF said:
glued/nailed them to reclaimed DN4
Click to expand...

thing is with dummy boards, you want them to sit flush against the sidebar of the end frame, using a spare frame top bar means there will be a wider gap than single beespace.

jenkinsbrynmair said:
thing is with dummy boards, you want them to sit flush against the sidebar of the end frame, using a spare frame top bar means there will be a wider gap than single beespace.
Click to expand...

Mine seemed to sit ok against the Hoffman frame sides, but I'll check again just to be sure. They do have to be put in the correct way around though, because obviously the main part of the board is slightly off-centre.

Today I started repairing a poly super that clearly had something fall on top of it, leaving round indentations in the top face. I clamped offcuts of ply smothered in vaseline to the walls and filled between them with car body filler. I couldn't build up the entire dent in one go, but the first lot should be pretty well hardened by tomorrow and I'll finish off then.

After that I used some of the 18mm ply I scavenged to make a box joint jig to use with my table saw which I'll use when making new floors and roofs. The first test on some scrap wood looked ok, though perhaps could have been better if I'd not used such a scabby piece of timber to start with. The jig is a relatively simple design, but the one I found that looks better requires tools to make it that I don't have so was a bit of a non-starter.

My son has been plying me with a few glasses of Lagavulin and Aberlour since dinner, so I shan't be playing with saws any more this evening. 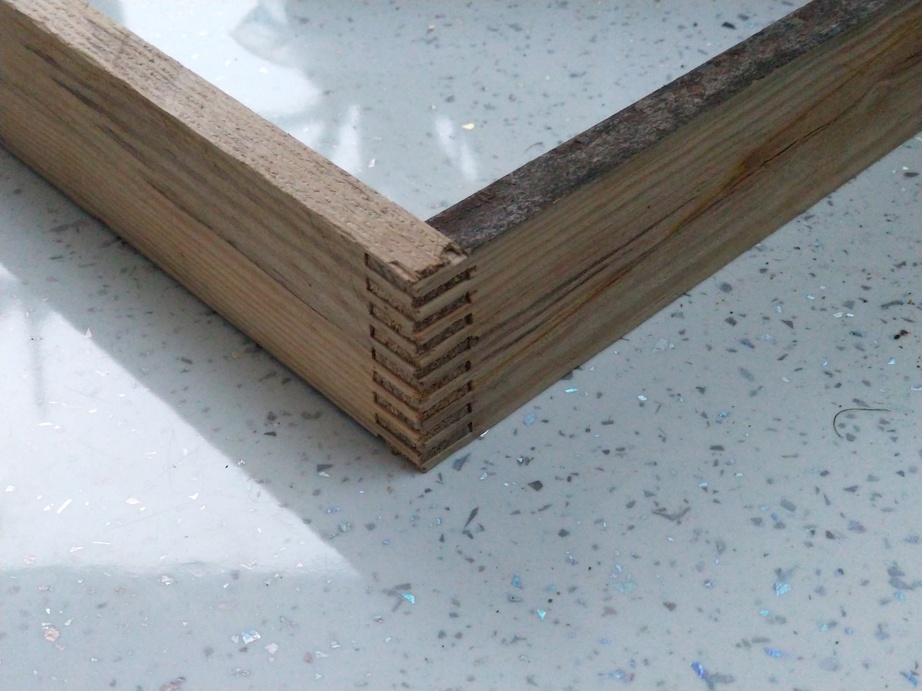 Beautiful. My skills and tools are to just butt them together and glue and screw. I make a lot of my own kit. Some is over 10 years old and still good. The bees don't care, but I admire craftsmanship

Thank you. I'd have to admit that historically my approach has also been just to butt things together and glue/screw/nail them, but now I have a table saw again and discovered it could be done I felt I had to give it a try

It looks great - makes me want to have a try.
But in comparison to a S+G butt joint half the material has been removed from the ends of the timbers and there's a multitude of additional ingress opportunities.
Ok for parts that can hide under the roof though.

I have four roofs in my pile of hive parts to repair. I say "repair", but pretty much all I'm keeping is the metal sheet of the roof cover. This evening I took three of them apart and cut ply/OSB to fit under each roof cover from the scraps I picked up the other day. The covers are all different sizes, varying by about 15mm. In my woodpile I found some offcuts of gravel board that have been lying about for years. I planed them down to 16mm to make some of the sides (which should give me 5mm clearance all round on a wooden hive for the smallest one) and discovered in the process that a few of the offcuts are actually cedar. I still need some more, but I'll focus on what I have for the time being, which is enough to complete two . Hopefully I should be able to get them done tomorrow and I'll have a hunt around to see if I can find enough bits to do the other two as well. The roofs I have are many and varied in design, particularly when it comes to the depth. I've decided to standardise at 100mm plus the thickness of whatever sheet material I used. Obviously they'll have no vents, which is one of the reasons I'm not re-using most of the original timber. I did notice on at least one that the mesh over the vent openings had been completely propolised up, which probably says everything you need to know about what the bees think about them.

I have a vague recollection that I've been told that PVA doesn't work very well with cedar because of the oils in the wood, but I'll have to check on that. If polyurethane is better then I have some of that as well so it shouldn't be an issue.

The waste from cutting down the OSB left me with enough to make three more dummy boards, so I cut those down to size. I don't desperately need any more right now, but there wasn't much else I could do with the waste and they'll surely come in handy one day.

The waste from planing down the gravel boards was, err, voluminous It filled two sacks. Fortunately I have a use for it. More of that another time, though it has just struck me that I could use it for making an old-fashioned style "quilts" to go over a crown board

I made this grafting frame on Sunday

Register today and take advantage of membership benefits. It's FREE!

Enter your email address to join:

Did you know that registered members can turn off the ads?

Enter your email address to join:

Thank you! Please check your email inbox to continue.
There's already a member associated with this email address. Please log in or retrieve your password.
Already a member? Click here to log in
Top